The State of Gig Economy in California. Statistics and Trends [2022]

The rise of the industrial economy in the 70s had the working population in California strive to get a full time job with an employer and show up for work. It has been the norm for decades, but if we study the shift in employment statistics closely, there is a big revolution in the making.

The working population in California is currently witnessing a post-industrial shift into a self dependent economy. Gen Z doesn't want to fit in the industrial complex and look for flexibility and satisfaction in their job.

How big is the gig economy workforce in California?

32% of the small business workforce in California work as independent workers.

Comparative analysis of gig economy and employment datasets for small businesses suggest a dramatic shift in how working population in California work: 32% of the small business workforce work as independent workers. In California there are 3,458,667 self employed gig workers ( freelancers and contractors ) compared to 7,433,443 salaried employees in small business payroll ( firms with less than 500 employees).

The gig economy workforce of self employed independent contractors, freelancers, also identified as non employer firms are becoming an important factor in California. As per the current 2019 NES ( released on June 30, 2022) there are 3,458,667 gig businesses in California, up from 2,814,409 in 2010.

This increase in the gig worker population can be safely related to increase in employment opportunities created by the rise of online platforms such as Uber, Lyft, Airbnb, TaskRabbit.

Which industries contribute the most to the gig economy in California?

The sector " Professional, Scientific, and Technical Services " contributed the most whereas the lowest contribution came from Utilities sector.

We aim to look at the distribution of gig economy workforce across broad 17 industry levels as defined under NAICS. As per the current 2019 NES ( released on June 30, 2022), there are 7 sectors with more than 250,000 gig workers. The sector " Professional, Scientific, and Technical Services " contributed the most with the number of gig workers as 583,377. The lowest contributor to the gig economy was the Utilities sector with just 1,255 gig workers across California. The number of gig "businesses" according to the respective industry sectors is exhibited in the table below. 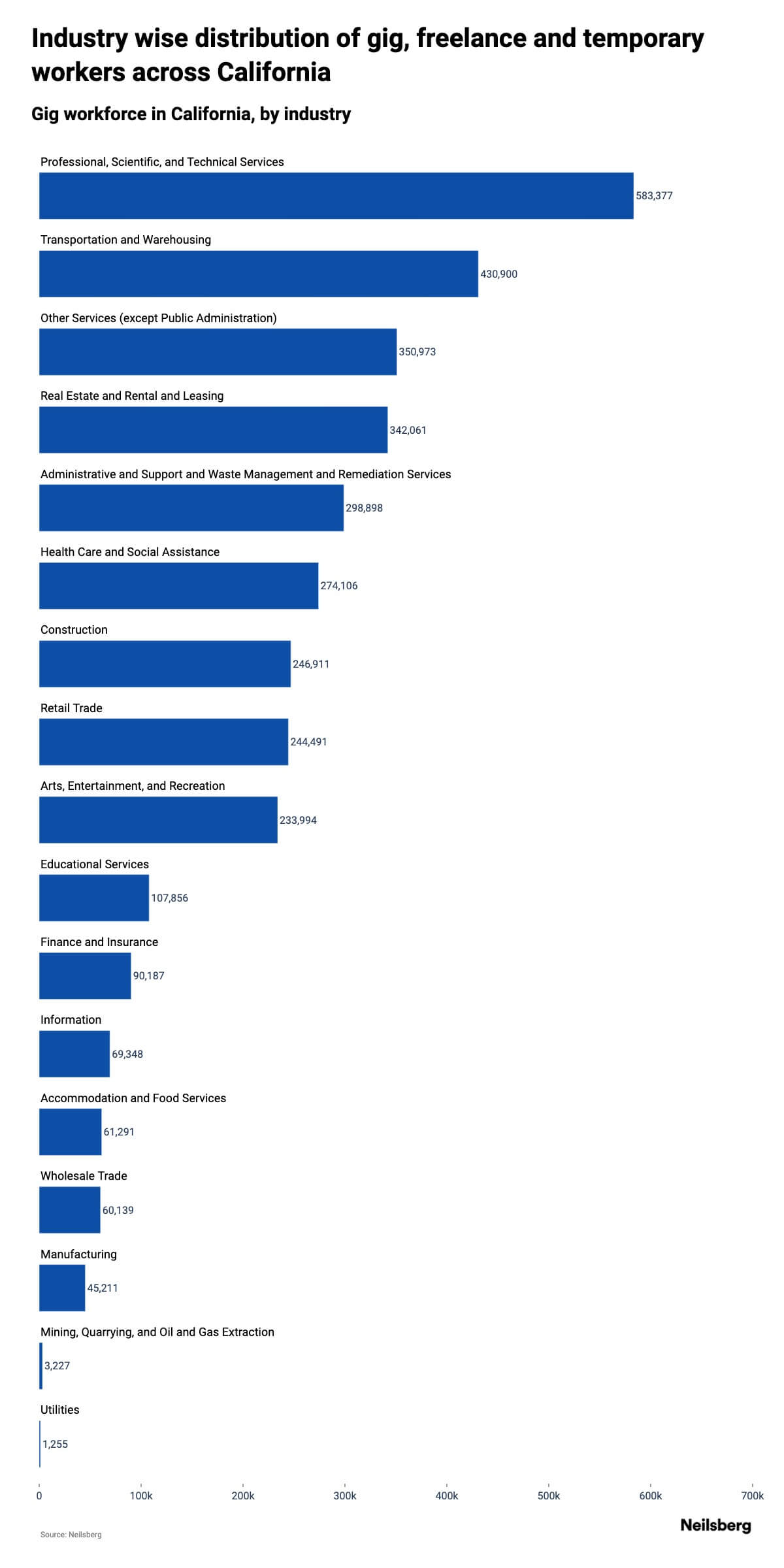 The next important thing to analyze is change in the gig economy workforce across different industries over the last decade. This analysis will help us determine the true drivers in the rise of gig economy in California. Analysis of the data suggests that the biggest driver in the gig economy across California is the Transportation and Warehousingsector. The number of gig workers increased by 259% from 120,012 in 2010, increasing to 430,900 in the data from the current reference year NES 2019.

The change in the number of gig "businesses" according to the respective industry sectors over the data analysis of last 10 reference years in NES is exhibited in the table below.

Which counties contribute the most to the gig economy in California?

Looking at the county distribution for the gig economy workers across California, the top 5 counties have 59.95% of the entire 3,458,667 gig workforce.

On the other hand the lowest contributing locations contribute approximately 0.08% of the state level gig workforce with 2,895 gig workers in total among them.

Who does gig work and what are the demographic profile of gig economy workers in California?

Across California, the gig work runs through every demographic profile criteria. As some of the the gigs such as delivering packages, food, driving passengers have low entry barriers work has a low barrier to start with, a lot of younger and population that is not economically established tend to take up these gigs more than the rest of population.

To get more details, we analyzed the most current Nonemployer Statistics by Demographics. We found that across California, the number of male workers in gig economy stood at 1,883,000 compared to 1,422,000 female workers.

Demographic breakdown of gig economy workers, by gender, in California

The distribution on the basis of ethnicity was stark and the number of non hispanics in the gig workforce stood at 2,498,000 compared to 860,000 workers with ethnicity as hispanic.

Demographic breakdown of gig economy workers, by ethnicity, in California

Demographic breakdown of gig economy workers, by race, in California

This article is for informational purposes only and is not intended to be legal or tax advice. We recommend that you consult with a qualified professional such as a lawyer or accountant before making a decision. Many of the products and services featured here are from our affiliate partners. We may receive commissions on purchases made from our chosen links. Read advertiser disclosure.